An intrepid group played this afternoon to a highly appreciative audience during the Hagbourne Church Christmas Tree Festival.  The band has sponsored a Christmas Tree this year, alongside beautifully decorated trees from 15 other local groups, organisations and businesses.

As well as playing carols as an ensemble, Ellie Mansbridge played three duets (accompanied by Martin Holliss).  Ellie has been learning the Eb tenor horn for just 6 months, and is well on the way to being an extremely good player. 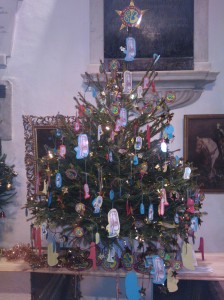