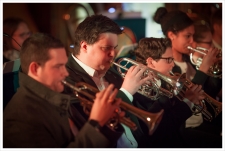 Blewbury Brass Band performed to a packed audience of friends and family at our annual Spring Concert.  Our St George’s Day themed concert opened fittingly with ‘The Standard of St George’, a rousing march, and was followed by a musical tour of England.

Neil Slater treated us to a fine euphonium solo playing ‘Blaydon Races’ and Alice Knight, our solo horn player, enjoyed the premier performance of her own composition, ‘Camelot’, which featured an off-stage fanfare from our solo cornets.  We were then entertained by our Learner Band who performed a selection of lively pieces.  Samuel, making his final appearance with the band, played a beautiful solo of ‘Killing Me Softly’.

The second half featured a lighter selection of music including the toe-tapping ‘Floral Dance’, ‘Singing in the Rain’ and ‘Eleanor Rigby’. The highlight of the evening was the joint performance between our Learner and Main bands, who closed the concert with an energetic rendition of ‘Hot Stuff’.

We would like to thank everyone for joining us, and hope you enjoyed your evening.