The band will be rehearsing with the St Birinus School wind band this evening (Wednesday 27 March) in the SBS school hall, in preparation for a “massed band performance” at the school’s Annual Concert on Wednesday 24 April.

Band members are asked to arrive at 7.15 so playing can start promptly at 7.30.  Martin will ensure that stands and music pads are brought over from the band hut.

The Blewbury Brass Band has join 248 other brass bands as a member of Brass Bands England (see www.brassbandsengland.co.uk), the leading charitable organisation in England devoted to promoting and encouraging participation in brass band music making across the country.

We are delighted to be a member of this growing organisation, and look forward to playing an increasingly active part to grow enjoyment of brass banding in Oxfordshire.

Would you please sponsor her to play a different brass instrument in each of the 10 brass lessons she will be doing after Easter?  We will add photographs to the website to show her playing each instrument.

Please hand payments to the Manor School office in clearly marked envelopes, or give them to Dion Dawson at band practice, or make a payment online by BACS to bank account Sort code 30-00-02 / Account number 00972113.

Thank you from Alice, and other budding musicians at Manor School. 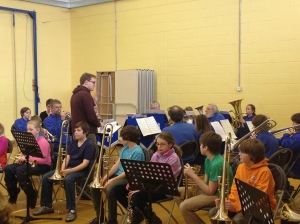 A total of 26 players, including a handful of adult “helpers” from the Blewbury Brass Band, got their instruments out (trumpets, cornets, flugel horn, tenor horns, baritones, a euphonium, trombones and an Eb tuba) and played a selection of music some well-known and others composed especially for the event. Two members of Blewbury Learner Band played two duet pieces, on the Eb horn and Eb tuba. 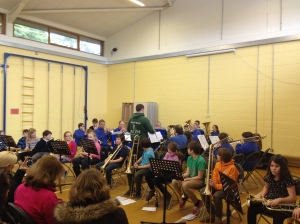 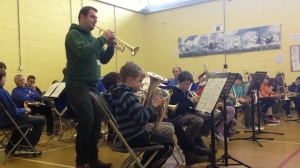 From the looks on their faces and from the volume of their clapping, the audience of more than 40 parents, grandparents, brothers, sisters and friends, enjoyed themselves enormously.

The Blewbury Learner Band will be joined by learners from local schools for a concert, arranged jointly with the Oxfordshire County Music Service.

The concert will take place on Saturday 2 March at South Moreton School, starting at 2 o/c.

Parents, grandparent and friends will be most welcome – the more the merrier!